Holy Spirit Parish was established by Bishop John L. May on June 10, 1977 with the appointment of Rev. Gordon Milsted as pastor.  The first parish Mass was celebrated on June 19th at the library on the high school campus of the Montgomery Catholic Preparatory School.  The 87 charter parish families continued to worship at that site while plans for permanent church grounds and structure were made.  Father Milsted took up residence at the St. Bede rectory until December of the following year when a house located in the Brighton Estates neighborhood was purchased for that purpose.

In September of 1979, 14.3 acres of land located at the current Vaughn Road parish campus was purchased.  Ground breaking ceremonies for a new church building were held in March of 1980, and on the following November 16th the newly ordained Archbishop Oscar Hugh Lipscomb dedicated the church and was the main celebrant for the first Mass in the new church, a day which coincided with his installation as the first Archbishop of Mobile.  The project was completed with seating for 300 in the church proper in addition to a small kitchen and large multi-purpose room.  A small house purchased with the land was kept for meeting and classroom space and was designated as Thomas Hall, named in honor of Thomas Germanson, the chairman of the Building Committee.  In March of 1985, a new rectory built on the parish grounds was dedicated.

Fr. Charles Troncale was appointed Pastor on September 2, 1999.  The parish broke ground on a new 758-seat church on December 5, 1999, with the dedication by Archbishop Lipscomb to follow on May 12th of 2001.  In February 2000, the 5.3 acres bordering the church property to the south were purchased from parishioner Helena Malus.  A house located on the purchased property was remodeled and became the new rectory in March of 2002.  In 2005, the former rectory was remodeled to serve as parish offices. 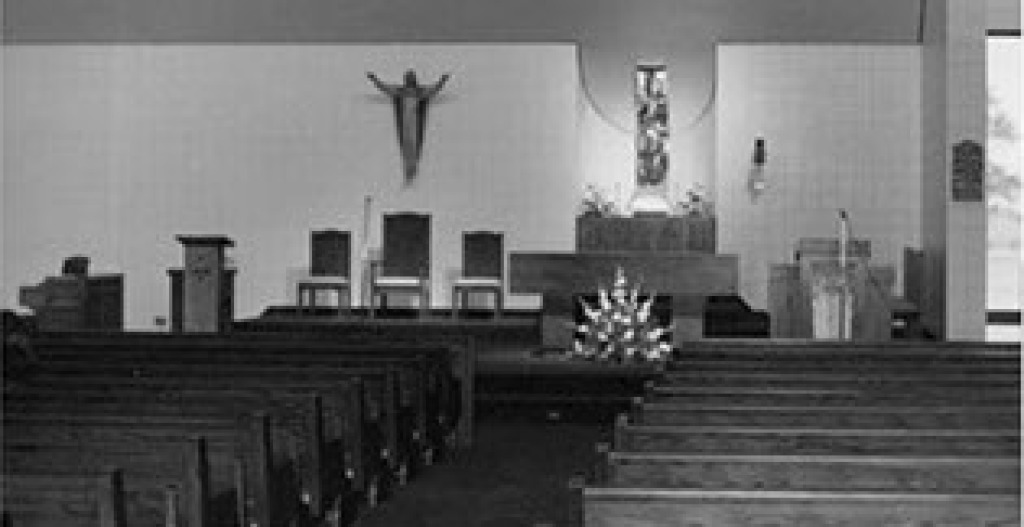 On May 29, 2011 it was announced that Fr. Patrick Driscoll was to become the new pastor of the parish effective the following October 15, replacing Fr. Troncale who was going to St. Vincent de Paul parish in Tallassee.  On July 16, 2011, the parish broke ground on a project which involved both construction of the first phase of an education complex and significant site improvements to the property.  On August 12, 2012, Archbishop Thomas John Rodi dedicated the new two-story, twenty-one classroom building.  In addition to parish catechetical classes and religious education programs, the new building houses the Holy Spirit campus of the Montgomery Catholic Preparatory School and consists of classes ranging from K4 through 6th grade. 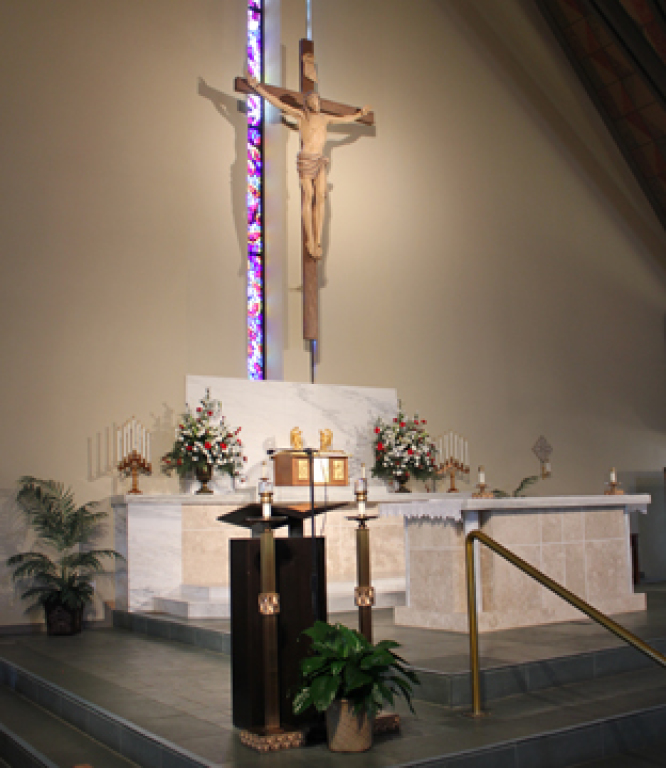 The new altar design brings the tabernacle to the center of the sanctuary. 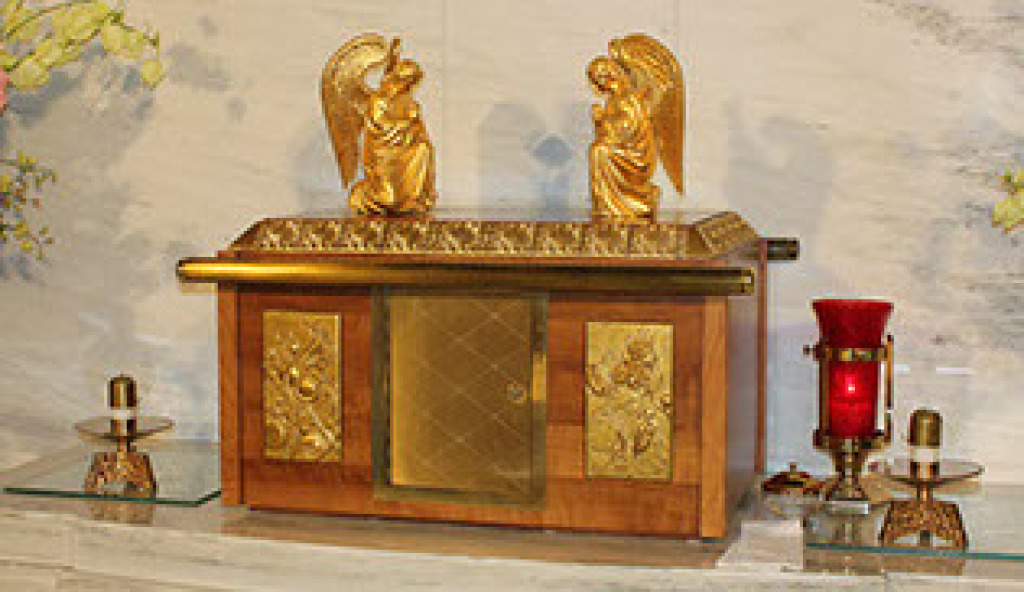 The tabernacle design is based on the historic Ark of the Covenant which housed the original Ten Commandments. A Catholic tabernacle houses the Blessed Sacrament, Jesus Christ as the new Covenant in Eucharistic form. This one is silk-lined and hand-crafted from acacia wood by artist Gianfranco Tassara of Milwaukee. It is located in the Blessed Sacrament Chapel which is reminiscent of the "Holy of Holies" in the Temple of the Old Testament. A red sanctuary lamp marks the presence of the Eucharist. The table supporting the tabernacle projects from the chapel wall and is topped with rare white limestone. Tabernacle doors are embossed with diamonds and flanked by brass panels, one depicting the Biblical raining of manna in the desert and the other representing the hosts and wheat of the Eucharist. Poles across the top of the tabernacle represent the tools with which the Ark of the Covenant was carried and the molding around the top is designed to reflect the concentric circles of the complimenting candlesticks. Resting atop of the tabernacle are hand-carved Ecuadorian angels posturing adoration. 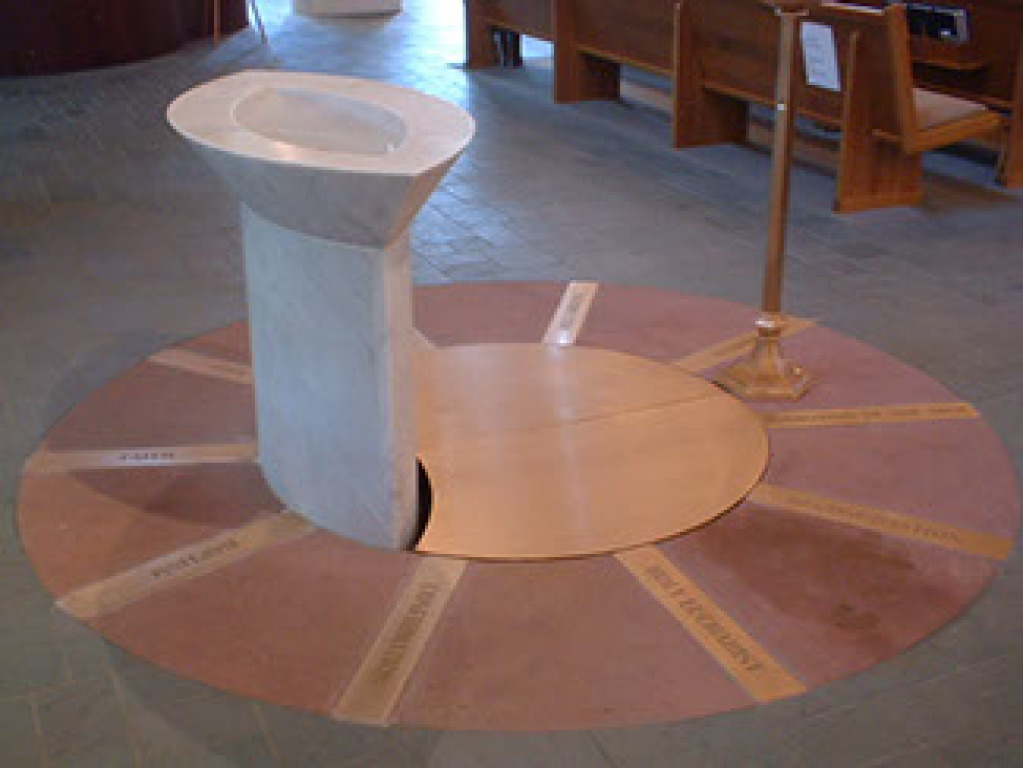 The altar design conveys multiple meanings. The chosen material, Rosa of Salome marble, is solid, polished rock, strong enough to be an "altar of sacrifice". The marble was excavated in Italy especially for this church project and was selected for its reddish brown streaks, calling to mind the blood of the sacrificial Lamb. The base is shaped like a cross while the top represents the table at the Last Supper where Christ initiated his own incarnation in the Eucharist. There are five crosses carved into the altar surface.

Positioned in the entryway, the baptismal font serves as a central location for holy water as well as a reminder of the baptismal sacrament. The upper bowl shape is reminiscent of Noah's Ark and the vessel which carried Moses safely down the river. The white marble symbolizes purification. The lower font is made of earthy sandstone, setting off the white of the marble rising from it. Water taken from the upper font would be used to baptize a person standing down in the sandstone, with the person subsequently rising "up out of the water" (cf. Romans: 3-6) after baptism. The overall circular design symbolizes the all-encompassing love of God with no beginning or end. The brass spokes on the wheel-shaped base are engraved with the seven sacraments of the Catholic Church. Three upper font plates are engraved with the three virtues flowing from baptism: faith, hope and charity. 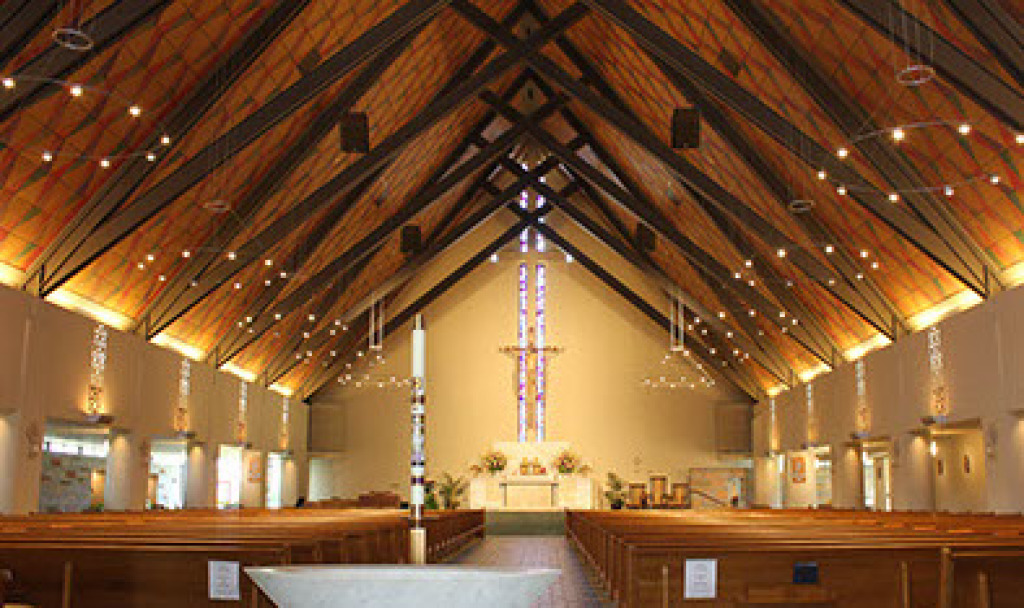 The Ceiling of Prayers

Over 100 volunteers hand-painted 2600 acoustical tiles to complete the 10,000 square foot ceiling artwork. The re wrapping process prevented the original intent of having names and prayers written on the backs of tiles as they face up to God, but many silent prayers helped shape the ceiling project. Each tile was spray-painted gold, then repackaged and delivered to a design site in the pastor’s house behind the church. Parishioners then sponge- painted crimson, violet, purple, and emerald liturgical colors onto the tiles, making each one unique and yet integral to an overall design by artist Susan Marie Pieri. Approximately 35% of the tiles had to be measured and hand-cut to fit the final grid. Each golden diamond pattern measures four feet by 2 feet, the same dimensions as each tablet containing the Ten Commandments.